Penultimate Round of the Spring Junior Karting Competition

Sunday saw the penultimate round of our junior karting competition, the Spring Junior Karting Championship. The sun was shining once again and much like Saturday t 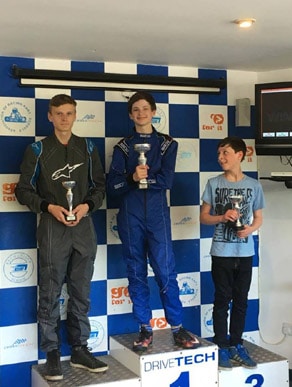 he track was very quick with plenty of lap times in the 23 seconds.

Josiah Lockett headed into the round with a 1 point lead over Matthew Baker, but with Matthew Baker not in this round it was all up to Josiah to improve. However Harry Sadler and Jacques Flanders were both there to stop him and improve their own points and keep themselves in the championship battle.

It was Josiah Lockett who lined up on Pole Position for the final, with Harry Sadler alongside him, Alex Acton and Neo Mcbraida shared the 2nd row, while Jacques Flanders and Jaden Mcleary, in his first race meeting, completed the grid.

Josiah and Harry both got good starts, but Josiah held the lead into the first corner, it was Jaden Mcleary who made the best start though and he was able to catapult himself into 3rd place!

It was a train for the lead with Josiah fending off Harry, but Jaden Mcleary was looking very quick in 3rd, trying to find a way past Harry. Unfortunately Jaden made a mistake and dropped back to 4th, with Neo Mcbraida taking 3rd.

It became a 3 way battle for the lead with Josiah still fending of Harry and Neo right behind in 3rd. Jacques Flanders was able to fight his way past Jaden into 4th place and set about catching the top 3, but it was a big gap to close.

Harry was trying everything he could, but Josiah defended brilliantly and held on to take the win. Harry pushed him over the line with Neo just behind. Jacques closed up massively at the end but was not close enough to make a move and took 4th, with Jaden taking 5th and Alex Acton 6th.

Harry Sadler took the fastest lap of the day, and Jaden Mcleary took the Driver of the Day Award in what was a brilliant debut into the championship.

The 10th and final round takes place on Sunday 19th June.