Round 5 of the Castle Combe Junior Karting Championship

Round 5 of the Castle Combe Junior Karting Championship took place on Sunday, the track was dry again, but the racing drew a number or surprising results. 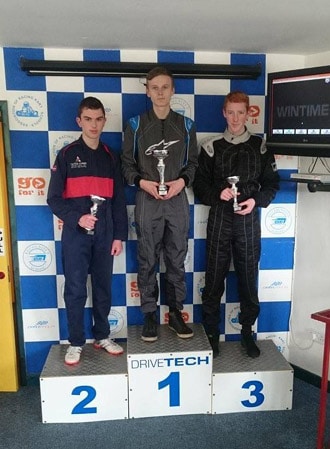 The first of which was Alex Cameron, who drove brilliantly in all 4 of his heats to take 4 wins and with it line up on pole position for the final. Harry Sadler made it 5 finals from 5 to line up 2nd on the grid, with reigning champion Jacques Flanders 3rd. Matthew Baker lined up 4th, Neo Mcbraida 5th and Cameron Polledri 6th. The big surprise being Championship leader Josiah Lockett not making the final.

As the lights turned green Alex Cameron aced the start and kept the lead into the first corner, quickly pursued by everyone else with every driver maintaining position. Alex kept everyone at bay for 2 laps, with the entire field bumper to bumper covered by the smallest of margins, but as they entered the 3rd lap Harry Sadler positioned his kart brilliantly to get the cutback on Alex Cameron to take the lead.

Out in front though Harry Sadler was able to set fastest lap and come across the line for a comfortable win. Jacques Flanders took 2nd, with Matthew Baker 3rd. Alex Cameron held on for 4th, with Neo Mcbraida 5th and Cameron Polledri 6th.

The driver of the day award went to Alex Cameron who was a very deserving winner of the award, just missing out on the podium.

Josiah Lockett still maintains the lead in the Championship, but now only has 2 points over Harry Sadler! With Matthew Baker and Jacques Flanders both 15 points further behind but with a round in hand.

Round 6 of the championship takes place on Sunday 24th April. We hope to see you then!