Round 2 of the Castle Combe Junior Karting Championship 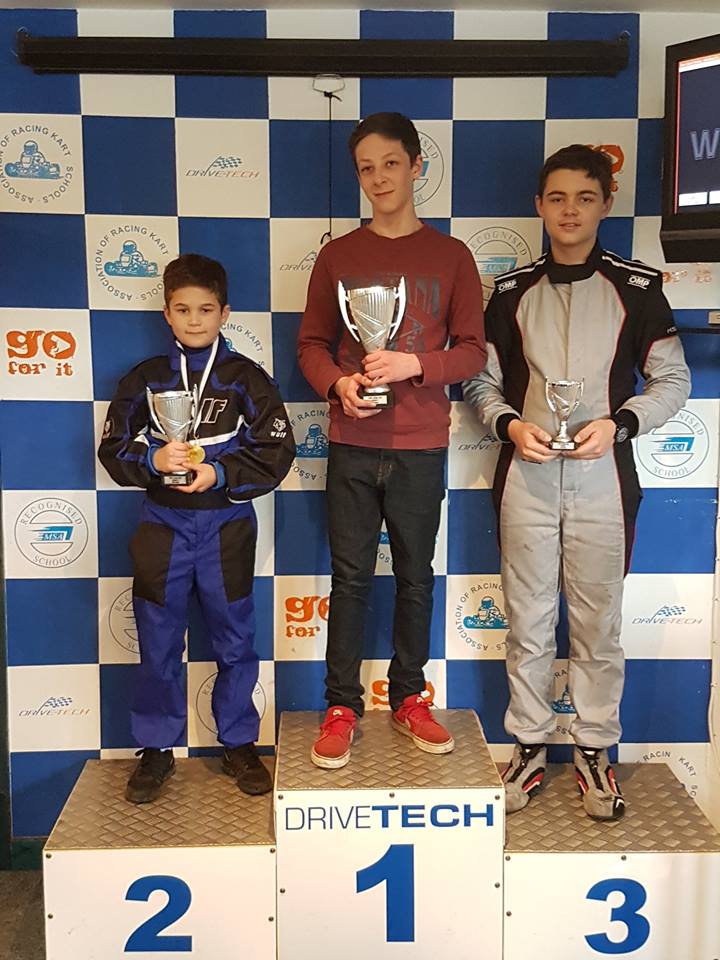 Round 2 of the Castle Combe Junior Karting Championship took place on Sunday and it was the first fully dry event on the new karts! So naturally the lap record was broken and set at a 25.20 by Matthew Starke.

Josh Poulain was on brilliant form and won all 4 of his heats to line up on pole position for the final. Neo Mcbraida joined him on the front row. Matthew Starke lined up 3rd, with Pedro Oliveira putting in some great drives to line up 4th. Joshua Slatter lined up 5th and Jack Meakin completed the grid.

As the lights turned green it was Neo McBraida that made the better of the starts and he held around the outside of the first corner to take the lead ahead of Josh Poulain. Josh was immediately under pressure from Matthew Starke forcing him to defend, which gave Neo a break out in front. Joshua Slatter dived up the inside of Pedro Oliveira at the top corner and they headed down the hill side by side. However Joshua was very unlucky and spun, dropping to the back of the pack.

Out in front Neo Mcbraida was pulling away, while the battle for 2nd raged on. Josh was doing a great job and making it very difficult for Matthew to pass. Which Pedro was able to take advantage of and dived up the inside of Matthew into the chicane to take 3rd place. Pedro then replicated this maneuver a couple of laps later on Josh Poulain to take 2nd place! Josh lost momentum and Matthew Starke was able to get along side up into the top corner. They headed down the hill side by side and Matthew was able to take the place.

Jack Meakin was next behind Josh Poulain and he was able to get the cutback at the first corner and take 4th place, with Joshua Slatter catching back up after his earlier spin to take advantage and move up into 5th.

A very exciting race that all happened behind Neo Mcbraida who drove faultlessly to take a very well deserved win. Pedro put in great drives all day to take 2nd place and with it the driver of the day award. With Matthew Starke completing the podium, taking the Fastest Lap of the day and the Lap Record. Jack Meakin took 4th place, Joshua Slatter 5th and Josh Poulain 6th, but took home the biggest points haul of the day.

In the Championship Matthew Starke leads the way, but only 2 points clear of Josh Poulain. Jack Meakin and Harry Sadler sit just 2 points further back in 3rd and 4th with Neo Mcbraida a further point back in 5th.

Joshua Slatter heads the best novice championship for drivers in their first championship with us, by sitting 6th in the overall championship just 10 points off the lead.

The next round of the championship is on Sunday 5th March, we hope to see you then.