Round 1 of the 2016 Spring Junior Karting Championship Report 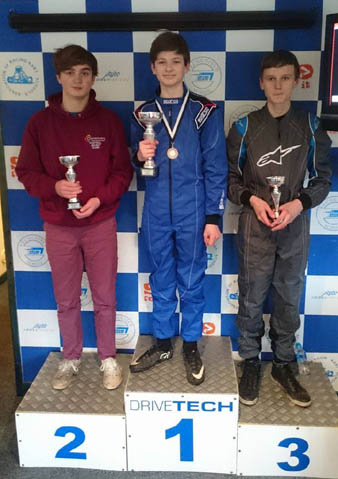 Round 1 of the 2016 Spring Junior Karting Championship took place on Sunday 7th February. 21 Drivers turned up for what was a very wet day.

The stand out driver of the day, without a doubt, was Josiah Lockett who lined up on pole position for the final after winning all 4 of his heats. He was joined on the front row by Cameron Polledri. Alex Mamuda lined up 3rd, with Harry Sadler lining up 4th. The final row of the grid was taken up by Jake Bishop and Robin Hayman.

Josiah Lockett got a great start, converting pole in the lead. Cameron Polledri held 2nd, with Alex Mamuda fending off the chasing pack. Robin Hayman and Harry Sadler were the chasers and they locked bumpers, which delayed them both giving Mamuda a bit of breathing space.

Hayman was able to fight his way past Mamuda as well and took 4th place, but Sadler had opened up enough of a gap ahead. As the race was coming to a close, Sadler was closing on Polledri, but never got close enough to make a move.

The Fastest Lap of the day went to Josiah Lockett, who was able to take the clean sweep, winning all 5 of his races and setting the fastest lap to take a maximum points haul. An achievement worthy of the Driver of the Day Award.

Round 2 of the Championship takes place on Sunday 21st February, we hope to see you then!