Round 2 of the Castle Combe Go Karting Championship

Round 2 of the Castle Combe Go Karting Championship took place on Saturday and it contained some absolutely brilliant races.

Michael Seabourne returned to the championship in fine form, lining up on pole position with Reigning champion Oliver Bayani alongside. Kieran Dawson put in a fantastic run of races and lined up 3rd, with Jeremy Woodward, also returning, lining up 4th. Stephen Islip made it two finals out of two starting 5th with Jamie Higgins lining up 6th. Archie Cousins was 7th and Ben Winter, who headed the points after the Heats, but was pipped to the semi-final by Oliver Bayani, completed the grid in 8th.

Bayani and Seabourne both got good starts, and headed into the first corner side by side, the entered the chicane still side by side, with Bayani just ahead and as they exited the chicane it was Bayani who had the lead. Kieran Dawson maintained 3rd place while everybody else battled over 4th, with Jeremy Woodward holding the position.

Out in front Bayani and Seabourne made a break for it, but the man on the move was Ben Winter, who charged his way up into 5th place and set about finding a way past Jeremy. There was contact at the top corner and they both lost out, with Jamie Higgins coming through into 4th place, with Jeremy and Ben continuing in 7th and 8th respectively. 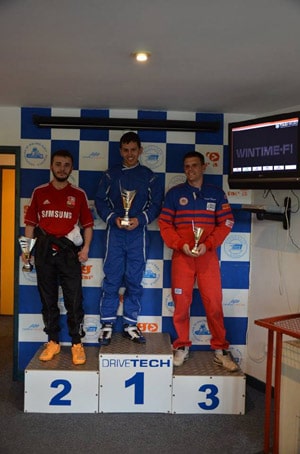 Seabourne was trying everything to find a way past Bayani, but Bayani was able to fend him off and take his 2nd win of the season. Dawson came through to take a brilliant 3rd place, with Jamie Higgins 4th. Stephen Islip took 5th, Archie Cousins 6th, Jeremy Woodward 7th and Ben Winter 8th.

The fastest lap of the day went to Michael Seabourne in the final with a very fast 23.72. While Kieran Dawson was the highest scoring driver on the day taking 53 points. Bayani was 2nd with 51 points and he extended his championship lead over Ben Winter who scored 45.

The full standings can be seen here: http://www.castlecombekarting.co.uk/championship-standings.html

Round 3 takes place on Saturday 4th June, we hope to see you then!