Flanders takes the title as Matthew Baker is hit by cruel misfortune!

Heading into the final round of the Championship, the battle for 1st was between two drivers, Jacques Flanders and Matthew Baker. However Matthew Baker had to win every single race and set fastest Lap to take the championship, while Jacques only had to improve on his previous lowest score by 1 point. This was not the only battle to be decided, Alex Acton was holding 2nd in the Championship, with Josiah Lockett not too far behind in 4th place. While the Best Novice Championship was also hotly contested with Alex Mamuda and Michael Saunders separated by just 1 point! 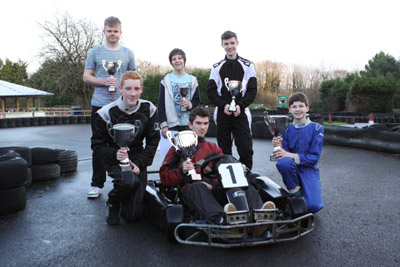 After all of the heats Jacques Flanders was unable to improve on his lowest score, which meant that it was all down to Matthew Baker who was still in contention having won all 4 of his heats and lined up on the front row of the grid for the final. But it was Josiah Lockett who qualified on pole position for the final, he had also won all 4 of his heats and was still chasing after 2nd in the Championship. Robin Hayman lined up 3rd on the grid, holding the all important Fastest Lap at this point. Martha Hopes made the final for the first time this year, to cement her victory in the Ladies Championship, lining up 4th on the grid. With the two best Novice drivers lining up 5th and 6th on the grid. Michael Saunders could still win the best novice championship, however he would need to win the final and set the fastest lap, much like Matthew Baker.

Josiah Lockett got a great start to lead into the first corner, but Matthew Baker was able to get himself into the lead and amazingly from 5th on the grid Alex Mamuda got himself into 2nd place, with Josiah falling to 3rd. The leading trio were able to break away from the rest of the field, with Mamuda challenging for the lead. As they exited the last corner Matthew Baker made a small mistake and Mamuda was able to make the move into the lead! It didn’t last long though and Matthew Baker charged his way back through into the lead. However the lap times in the final were a long way off Robin Hayman’s fastest lap set earlier in the day, but Baker was still pushing hard.

As he came up to the top corner, his brakes failed causing him to take evasive action to avoid the barrier and dropped right down the order into 5th Place. This allowed Josiah Lockett through into the lead of the race, however Alex Mamuda was still pushing extremely hard with Michael Saunders moving up into 3rd place.

Mamuda was unable to find a way back past Lockett though and Lockett took the victory. Mamuda and Saunders both impressed taking their first podiums in a final, while Robin Hayman took 4th maintaining his fastest lap from earlier in the day. Matthew Baker after horrendous bad luck finished 5th, with Martha Hopes, also very unlucky, finishing 6th. However she did set the fastest lap of the final. The Driver of the Day award went to Matthew Baker, who drove brilliantly all day.

It was the closest championship we have had for years and Jacques Flanders took the championship with 132 points. Josiah Lockett was able to jump up to 2nd after a brilliant final round to finish just 2 points behind Jacques on 130. Matthew Baker ended up just 1 point further back on 129 in 3rd place. Alex Acton took 4th with 120 points, with Ed Haffenden and Neo Mcbraida finishing 5th and 6th respectively.

Alex Mamuda was the best novice with 89 Points, just 3 ahead of Michael Saunders. While Martha Hopes took the Ladies Championship with 73 Points.

Round 1 of the 2016 Spring Championship will take place on Sunday 7th February. Hope to see you then!