Saturday saw round 1 of the 2017 Karting Championship at Drive-Tech in Castle Combe, and it produced a very competitive field of drivers.

Lining up on pole position for the final, starring in his debut in the championship, was Matt Hallam. Last years runner up Ben Winter joined him on the front row of the grid. Reigning double champion Oliver Bayani lined up 3rd, with Michael Seabourne, 3rd in last years championship, lining up 4th. Another very impressive performance was from Andrew Fryer in his first ever round, lining up 5th on grid sharing the row with 5th in last years championship Kieran Dawson. Ed Barrs, who was 2nd in the 2013 Championship, was very unlucky being wiped out in one of his heats, but was still able to fight back and make it into the final starting 7th. With our Reigning Junior Champion Matthew Baker completing a very impressive grid.

As the lights turned green it was Ben Winter who made the best start and he was able to get the jump on Matt Hallam. They headed into the first corner with Ben Winter ahead and Matt Hallam tried to fight back but it resulted in clipping the wall and spinning to the back of the field. Michael Seabourne was able to take advantage of this around the outside into 2nd place with Oliver Bayani avoiding Matt and continuing in 3rd place. Kieran Dawson was also able to take advantage and moved into 4th place with, Andrew Fryer in 5th, Ed Barrs 6th, Matthew Baker 7th and Matt Hallam continuing in 8th.

The leading trio were able to pull away from the chasing pack, all three of them lapping at lap record pace. The battle for 4th was very close with Kieran Dawson holding that 4th place. 5th to 7th were bumper to bumper with Matt Hallam catching the pack back up.

Michael was not able to get close enough to Ben Winter to have another attempt at the lead, so it was Ben Winter who held on to take the victory. Michael Seabourne took 2nd place just ahead of Oliver Bayani. Kieran Dawson took 4th, Andrew Fryer 5th, Ed Barrs 6th. Matt Hallam was able to catch the pack back up and pulled off a brilliant move on Matthew Baker to finish 7th, with Matthew Baker taking 8th.

The Championship is being led by Ben Winter on 57 points, 4 points clear of Oliver Bayani. Michael Seabourne sits 3rd a further 3 points back with both Kieran Dawson and Matt Hallam joint on 43 points. Andrew Fryer sits 6th and is the best placed Masters driver on 42 points.

The full 2017 karting championship standings can be found here: http://castlecombekarting.co.uk/championship-standings/

Round 2 of the 2017 Karting Championship takes place on Saturday 22nd April. 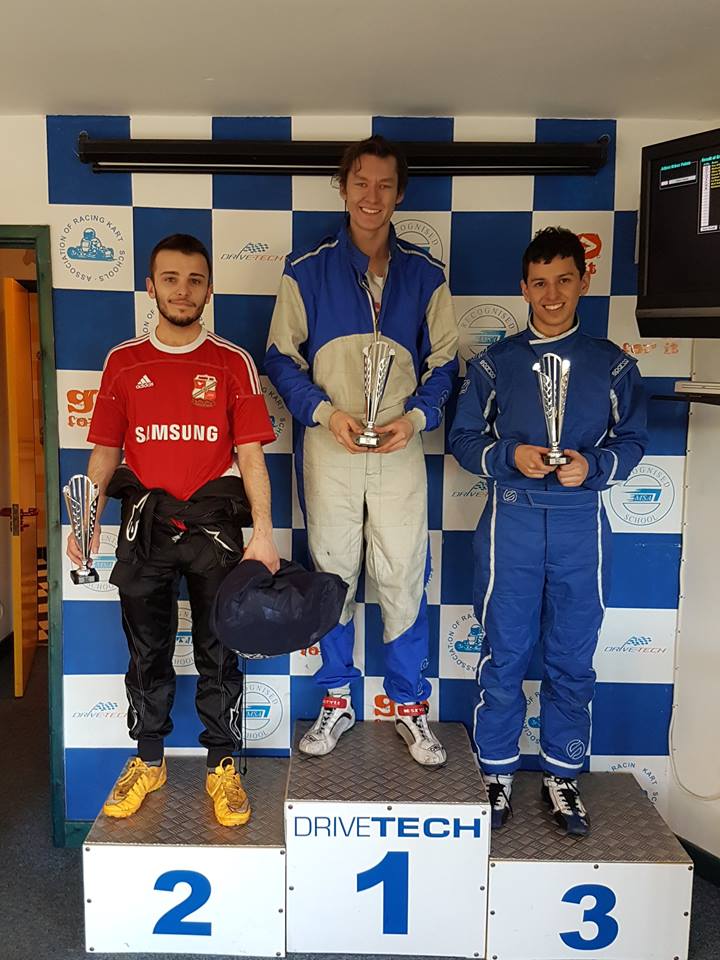